INTRODUCTION
Change is a permanent part of our lives. Many changes are taking place around us on their own. In the fields, the crops change from time to time. Somtime, leaves fall from trees, change colour and dry out. The flowers bloom and then wither away.
Some changes happen in our body like our nails grow. our hair grows, we grow taller and our weight increases as we grow.
A change could alter physical properties or chemical properties or both of the concerned matter. These changes may be observe by us at school, at home, in the playground in the garden or any other place.
A change can bring about different kinds of effect in the things around us. Some of the effect brought about are permanent in nature, and hence, cannot be reversed. However, some effects are about in position, shape, size or state of the things. These effects are temporary in nature, and hence can be reversed.
Hence a change can be defined as “an alteration in properties of matter, brought about by some cause” (b)  Irreversible  change
A change that cannot be reversed by reversing the condition is called an irreversible change.
eg. Burning of paper, curdling of milk

Activity–1
AIM : To find out weather the change can be reversed or not.
Some common changes
Change             Can be Reversed

Raw egg to boiled egg                 Yes/No
Batter to idli
Wet clothes to dry clothes
Woollen yarn to knitted sweater
Grain to its flour
Cold milk to hot milk
Straight string to coil string
Bud to flower
Milk to paneer
Cow dung to biogas
Stretched rubber band to its normal size
Solid ice cream to molten
Some common changes are given in above table. We have to find that the changes given can be reversed or not.

The answer of changes which can be reversed or not is given in Yes/no in the table below.

Everything around us is undergoing a process of change. Our hair and nails keep growing. Leaves die and new leaves take their place. While some changes in our environment are temporary and can change back to their original positions, other changes are relatively permanent.

We can bring about a change in a substance by doing one or more of the following processes:

Changes caused by heating: When an object is heated, it gets affected in one or many possible ways.

Changes by applying pressure: When we apply force to an object,

Changes by mixing a substance with other: We can bring about a change in a substance by mixing it with another. For example, making solution by mixing water soluble substances in water.

Metals expand on heating and contract on cooling.

Chemical changes: These are the changes in which chemical properties of a substance change, and a new substance is formed. For example, cooking of food.

Physical changes: These are the changes in which only physical property of a substance changes and no new substance is formed.

Reversible changes: These are the changes that can be reversed. For example, stretching of rubber.

Irreversible changes: These are the changes which cannot be brought back to its original state. For example, burning of paper.

Contraction: A process in which an object becomes smaller or shrinks is called contraction.

Evaporation: A process in which liquid changes into vapour is called evaporation.

Expansion: A process in which an object becomes bigger in size, e.g., metals expand on heating.

Melting: A process in which a solid melts to become a liquid on heating is called melting.

Can all changes always be Reversed?

On this basis, changes around us can be classified into two broad categories:

Reversible changes can be described as changes that can be reversed by reversing the action or changing the conditions. Example: freezing of water, rolling of a chapati from dough etc.

Irreversible changes can be described as changes that cannot be reversed even after bringing about changes in the conditions. Example: rusting of iron, cooking of vegetables etc.

Difference between physical and chemical changes:

While chemical changes are often irreversible

No new products are formed when an object undergoes physical change (iv)    Natural and Man-Made changes
(a)     Natural  change  : A change that occurs naturally on its own is called a natural change.
eg. changing of season, occurence of tides, eclipses.

(b)      Man-made  change  : A man-made change is the one that occurs because of human activities.
e.g. Changing the direction of flow of a river by building a dam. There are other ways to bring about changes in substances:

When we add a salt to water it becomes salty but this is a reversible change.

Changes cause by heating

Changes Caused by heating
(1)      Some objects simply get hot, but no other changes take place.
When you drink hot milk or coffee from a cup you may feel that the cup gets hot however, no change in the state of the cup take place.
(2)      Some object get hot and expand.
eg. Metal key on heating got hot as well as increased in size.
(3)      Some object get hot and their shape and size changes.
eg. When the candle is lighted it starts burning. Its shape a nd size also changed.
(4)      Some of the object shows change in their state.
eg. Ice is heated it change into water and on further heating changes into steam. All these changes can be reverse. Again the metal rim is made slightly smaller than the wooden wheel. On heating, the rim expands and fits onto the wheel. Cold water is then poured over the rim, which contracts and fits tightly onto the wheel. 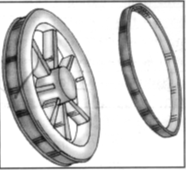 Cart wheel with metal rim fixed to it

CHANGES CAUSED BY PRESSURE OR FORCE
When you force into a balloon by applying pressure of your lungs, the shape and the size of the balloon changes. If you continue inflating the balloon with more air, a stage comes when the balloon burst and its shape changes again.
Metals can be hammered into thin sheets. The gold and silver leaves are prepare by gently hammering the small pieces of these metals with wooden handles.
eg. Stretching of rubber bands, spinning of cotton fibres

CHANGES CAUSED BY DISSOLVING
Substances, such as common salt, sugar, copper sulphate crystals etc. are soluble in water. During the process of dissolving a change is brought in the soluble substance.
Equal amounts of all soluble substances do not dissolve in any fixed amount of water.
However with the rise in temperature of water, more amount of substance dissolves in it.

Food: Where Does it Come from?

Getting to know Plants

Garbage In, Garbage Out

Motion and Measurement of Distances

The Living Organisms and their Surrounding