*    Note : combination of cell is known as battery.

An electrical circuit in symbols : 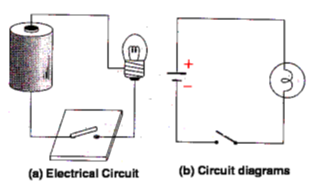 Requirements of a Circuit
Suppose that you were given a small light bulb, an electrochemical cell and a bare copper wire and were asked to find the four different arrangements of the three items that would result in the formation of an electric circuit that would light the bulb.
4 different attempts 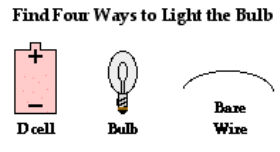 Conductors - Materials that allow electricity to flow through them easily.

Insulators - Materials that do not allow electricity to pass through them.

This sign is used in areas which are near electric junctions as a warning.

Electricity can be very dangerous if you do not handle electrical devices carefully. One should never play with electrical wires and sockets. Electricity from cells is safe and you can experiment with it, but you have to be careful not to connect the two terminals of a cell directly through a wire/conductor. Electricity generated by portable generators is dangerous and should not be used for experiments.

A demo video link to understand the working of Electric Circuit