Types of Motion
(i)    Random Motion : Motion having no specific path
Example : Motion of butterfly, Motion of kite. (ii)    Translational  Motion : Motion in which all particles of a moving body describes identical trajectory.

(b)    Curvilinear Motion : When a body moves in a curve path, it is known as curvilinear motion.
Example :  Car moving on a curved road.

(iii)    Rotational Motion : Motion in which a whole body move about an axis is called a rotational motion.
Example : Motion of top, Rotation of earth 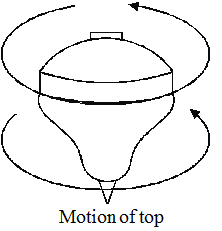 (iv)    Periodic Motion : Motion in which an object repeats its motion after a fixed interval of time is called periodic motion.
Examples :
(ii) Motion of a swing.

(a) Oscillatory Motion : The to and fro periodic motion of a body about a fixed point is called oscillatory motion.
Example : The motion of a simple pendulum, a body suspended from a spring (also called to and fro motion). 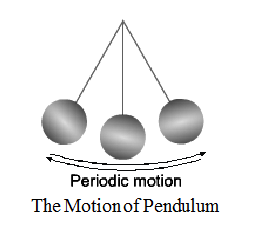 Motion: It is a state of objects in which they are moving, that is, they are changing their place with the changing time.