1. Axial Skeleton
It consists of bones of skull, vertebral column and chest.
•    Skull : The human skull has 22 bones of which 8 are present in the cranium and 14 on the face. These bones protect the brain and sensory organs. 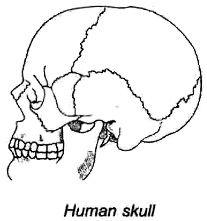 •    Vertebral Column : It is made up of 33 ringshaped bones which are called vertebrae. These bones are arranged as follows. 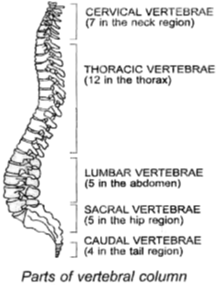 •    Chest Bones : The first seven pairs of ribs join the vertebral column at the back and the sternum in front as shown in Fig. The next three pairs of ribs are attached to the seventh pair. The rest of the two pairs of ribs are free. Hence these are known as floating ribs. Chest bone and backbone together form a box called the rib cage. Some important internal parts of our body like the heart and lungs are protected by the rib cage. Our body is capable of performing a wide variety of simple and complex functions. It is able to do so because of the internal structure that facilitates its movement.

Locomotion: Movement of organisms from place to place.

Locomotion
There are two kinds of movements:

The human skeleton is the internal framework which is responsible for giving support, shape and protection to our bodies. It contains 206 bones, each playing a distinct yet important task. The skeleton can be classified into two parts called as the axial and the appendicular. The axial skeleton comprises of the central part of the skull, spine, and ribs and the appendicular skeleton consists of the arms and legs.

(i) Human skeleton: It forms a framework that gives shape and support to the body.

It consists of 206 bones. It protects internal organs.

(a) Skull: It protect the brain. It is rigid box made up of plates of bone firmly

(b) Rib cage: It is flexible case of ribs. Each rib curves round the side of the chest

from the backbone and is joined in front to a plate of bone called sternum. Ribs are connected to one another by the muscles. Two lower most pairs of ribs are called ‘floating ribs’.

(c) Backbone: It is also called the spine or vertebral column. It is a chain of small bones called vertebrae. It protects the spinal cord, which carries messages between the brain and body. It also supports the skull, ribs and limbs.

(d) Limbs: It is made up of long bones with joints that allows them to move. They are mainly for support.

Bones of hands and legs: Bones of arms, thighs, etc., are long. They give strength to our body. Bones of fingers and toes are short. They help us in holding things. The hands and legs are constructed in same pattern as described below

(i) Arms: Fore-arms is made up of two bones and hands have several small

bones. Shoulder bones have a pair of collar bones in front and a pair of

(ii) Legs: Lower leg is made up of two bones and feet have several small

bones. Hip bones or gridles bear weight of body and are attached to

· Locomotion in other animals:

(i) Fish: Locomotion achieved by lateral contractions of the muscular body with a

final thrust by the tail. Fish swim by forming loops alternately on two sides of the body.

(ii) Birds: When the large flight muscles contract, they pull the wings down.

(iv) Earthworms: Move by stretching out body in front and keeping the hind end fixed to the ground.

· The bones are moved by alternate contractions and relaxations of two sets of muscles.

· The bone joints are of various kinds depending on the nature of joints and direction of movement they allow.

· Strong muscles and light bones work together to help the birds fly. They fly by flapping their wings.

· Snakes slither on the ground by looping sideways. A large number of bones and associated muscles push the body forward.

· The body and legs of cockroaches have hard coverings forming an outer skeleton. The muscles of the breast connected with three pairs of legs and two pairs of wings help the cockroach to walk and fly.

Limbs: The arms or legs of an animal.

Bones: These are the hard white structures below our skin that protect our internal organs. Bones are incapable of bending.