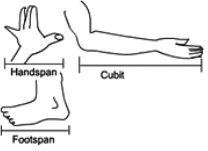 Disadvantages of Arbitrary Units of Measurement: You have seen that arbitrary units are made up of lengths of different body parts. These lengths can vary from one person to another. This can create lot of confusion as there would be no uniformity in measurement. We need standard units of length and other physical quantities to obtain the same value for a measurement.

Transport: It is a mechanism in which people and goods are carried from one place to another.

In ancient times people used to move only on foot and carry goods either on his back or on the back of some animals.

After the invention of wheel, Bullock carts and camel carts were developed.

A great change in the modes of transport was made:

Transport then evolved in the 19th and 20th Century to bus, trains, cars, Airplanes, jets, steams and water boats, etc.

With the changing times, transport also has gone through various modifications i.e. from animals to the invention of wheels. The evolution of transport is evident when we observe the fast cars, bullet trains etc. Even today new modes of transport are being researched upon.