(ii)    Jute :
Jute fibre is obtained from the stem of the jute plant. It is cultivated during the rainy season. In India, jute is mainly grown in West Bengal, Bihar and Assam. The jute plant is normally harvested when it is at flowering stage. The stems of the harvested plants are immersed in water for a few days. The stems rot and fibres are separated by hand. 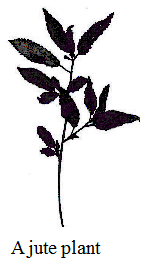 It is a long, soft , shiny plant and is one of the cheapest natural fibres. Jute fibres are composed of cellulose and lignin.
•    Jute is a rainy season crop, grown best in warm, humid climate.Jute plant requires temperature ranging from 17ºC to 40ºC and rain  fall from 120 mm to 150 mm
•    Almost 85% of the world’s jute cultivation is concentrated in deltas of Ganga.
•    Harvesting of jute plant is done at flowering state. The stalks are cut close to the ground. They are then tied into bundles and soaked in water for 20 days. It softens the tissues and permits the fibres to be separated. The fibres are then stripped from the stalks in long strands and washed in clear, running water. Then they are spread on a that ched roof to dry.
•    Jute is said to have more than a thousand uses. It is the second most important vegetable fibre after cotton, not only for its wider cultivation, but also for its uses.
•     Jute is used to make cloth for wrapping bales of raw cotton, and to make sacks and coarse cloth. Jute fibres are also woven into curtains, chair coverings, bags, carpets, hessian cloth, etc

1.    Cotton wool : Cotton wool is obtained from cotton plant. It is made up of thin cotton fibres.
2.    Fabric : Woven material (cloth) is called fabric.
3.    Fibre : Thread like animal or plant tissue is called a fibre.
4.    Knitting : Knitting is a process of making a piece of fabric from a single yarn.
5.    Spinning : The process of making yarn from fibres is called spinning.
6.    Weaving : The process of arranging two sets of yarn together to make a fabric is called weaving.
7.    Yarn : Spun fibres are called yarns.

Plant fibres: All the plants have fibres in their body structure, e.g., cotton and mango have fibres on their seed, coconut on its fruit, jute in its stem and banana tree in its leaf.

Yarn: Yarn is defined as a long, twisted and continuous strand composed of interlocked fibers

Fibre The thin threads or filaments which form a yarn are called Fibres.

Fabric The material made by weaving the threads from fibres is called fabric.

Weaving- Weaving involves the making of fabric from yarn.

Cotton bolls: Fruits of cotton plant are spherical-shaped structures of the size of wall nut which are called cotton bolls.

Cotton is planted early in the spring.

Ginning- The process of separating the cotton fibres from its seeds is called   ginning.

Spinning- The process of making yarn from fibres is called spinning.

Retting- The process of rotting the stems of the plants in water to remove the sticky substance and separate fibers is called retting.