*    A Shadow has two Regions :
For a non-point source of light (i.e., an extended source of light), the shadow of an object has two parts, namely, the umbra and the penumbra. The umbra is the darkest inner part of the shadow where no light falls at all. The penumbra is the part which surrounds the umbra. Some rays of light fall on this region and partially illuminate it. Thus, the penumbra is called the region of partial darkness.

(i)     Umbra : The inner region of total darkness is called umbra.It is the evenly dark part of a shadow. Umbra means ‘shade’ in latin.

(ii) Penumbra : The outer region of partial darkness is called penumbra.  It is the fuzzy part between the dark and the light . Pene means ‘almost’ in Latin.
Umbra and penumbra are clearly formed only when the source of light is big and opaque body is small.
If one is in the umbra of an object, the light source is completely obscured. If one is in the penumbra, the source is only partially obscured, to a greater or lesser degree as one moves through the penumbra. Shadows are often fuzzy, particularly when the surface on which the shadow lies is far from the object casting the shadow. This fuzziness is because of only point light source in space. All sources have some geometrical size.Thus, light from one edge of the source is not quite parallel to light from the other edge 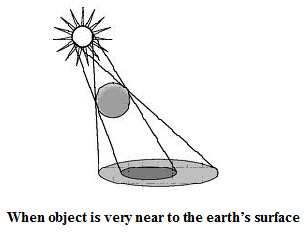 The result is a larger and fainter penumbra that is hardly visible. This is the reason why we cannot see the shadow of a bird flying high up in the air . Behaviour of light at the interface of two media :
When light travelling in one medium falls on the surface of a second medium, the following three effects may occur :

(i)      A part of the incident light is turned back into the first medium. This phenomenon is called reflection of light.

(ii)     A part of the incident light is transmitted into the second medium along a changed direction. This phenomenon is called refraction of light.

(iii)     The remaining third part of light energy is absorbed by the second medium. This phenomenon is called absorption of  light.

Shadows are dark regions formed when an opaque object blocks the path of light. This formation is possible only because light only travels in a straight line.

A shadow will not form if any of these is absent. This explains why we cannot see a shadow in the dark. It is only when light rays are obstructed by an opaque object that we get a shadow of the object. When an opaque object is placed in path of light, a dark portion is formed on the opposite side of object on the screen. This dark portion is shadow.
(1) The size of shadow depends on the distance of source of light and on the angle at which the light rays fall on the object.
(2) If the source of light is closer to the object, a larger shadow is formed than when the source of light is far from the object.
(3) The shadow can be seen only on a screen. The ground, walls of the rooms, a building, or other such surfaces act as a screen for the shadows you observe in everyday life
(4) Shadows sometimes gives lot of information about the object.
(5) Shadows are in black in colour and this is not changed by the colour of the opaque objects. So a red and yellow rose will have same black shadows.

Figure 7: Umbra and Penumbra
Characteristics of a Shadow

The size of the shadow varies according to the presence of light coming from the different angles:-