Speed
The distance travelled by a body in unit time is called its speed.
Therefore, speed = Distance/Time

(a)    Uniform Motion : A body has a uniform motion if it travels equal distances in equal intervals of time, no matter how small these time intervals may be. For example, a truck running at a constant speed of say, 20 m/s, will cover equal distances of 20 metre, in every second, so its motion will be uniform.
Or
If it moves along a straigth line with a constant speed it is said to be in uniform motion.

(b)     Non-Uniform Motion : A body has a non-uniform motion if it travels unequal distances in equal intervals of time. For example, If a car moving on a highway , we will find that it covers unequal distances in equal intervals of time. It covers :
5.9 metre in the 1st second,
15.7 metre in the 2nd second,
30 metre in the 3rd second, and so on.
Or
If the speed of an object is not moving along a straigth line  keeps changing, its motion is said to be non-uniform.

Uniform and Non-uniform motion can be shown graphically also

Ex. 3 A body satrts from A and moves according to given figure. Time for each interval is :

The distance, speed are as follows for different path. 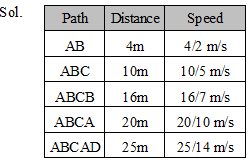 Motion in which an object repeats its motion after a fixed interval of time is called periodic motion.
Examples: