Yarn to fabric
There are many ways by which fabrics are made from yarns. The two main processes are weaving and knitting. Activity–2
Aim : Weaving of paper strips.
Materials required : Sheets of paper of differnt colours.
Method : Cut square pieces of length and width equal to 30 cm from each sheet. Now, fold both the sheets into half. On one sheet draw lines as shown in

(a) and on the other as shown in (b). Cut both the sheets along the dotted lines and then unfold. Weave the strips one by one through the cuts in the sheet of paper as shown in (c). Fig. (d) shows the pattern after weaving all the strips.

(b)    Knitting : In knitting, a single yarn is used to make a piece of fabric A single yarn gets pulled out continuously as the fabric gets unravelled. Socks and many other clothing items are made of knitted fabrics. Knitting is done by hand and also on machines. 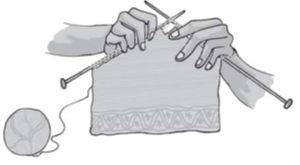 All Cloth materials are made up of long, narrow, thin structures called fibers.

The thin threads or filaments which form a yarn are called Fibres.

Fibers are obtained from natural as well as man-made sources.

Where do Fibres come from?

Fibres can be broadly classified into two broad categories:

Natural Fibres: Fibres that come from plants and animals i.e. are found in nature are called Natural Fibres. Examples:

We get jute and cotton from plants.

Silk Fibre can be procured from the cocoon of silkworms. The process of obtaining Silk from Silkworm is called Sericulture.

Synthetic Fibres: Fibres that are made of chemical substances i.e. substances not found directly in nature are classified as synthetic fibres. Examples include nylon, acrylic and polyester.