(a)     General definitions about reflection :

(i)     Mirror :
A smooth polished surface from which regular reflection can take place is called mirror. MM’ is the mirror as shown in figure. 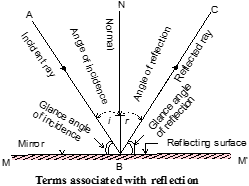 (ii)     Incident ray :
A ray of light which travels towards the mirror is called incident ray. Ray AB is incident ray in figure.

(v)     Normal :
The perpendicular drawn at the point of incidence, to the surface of mirror is called normal. BN is the normal in figure.

Regular and diffused reflection :
When a beam of light falls on a smooth, highly polished surface, almost entire light gets reflected in the same medium in a definite direction. This type of reflection is called regular reflection. We can see our image formed by a mirror due to the phenomenon of regular reflection.

How to make a Pinhole Camera?

Step 1: Take two cardboard boxes one larger than the other such that one box slides into the other without any gap.

Step 2: Cut out open one side of each box. On the opposite side of the larger box cut a small hole in the center.

Step 3: On the opposite side of the smaller box cut a square of about 5 cm and cover this open area with a tracing paper.

Step 4: Slide the smaller box inside the larger one such that the side with the tracing paper is on the inside.

Step 5: Cover the camera and your head with a black cloth and then get ready to observe the distant objects.

It is a simple camera with a small aperture and forms an inverted image of the object.

How to prepare it
(1) Take two boxes so that one can slide into another with no gap in between them. Cut open one side of each box.
(2) On the opposite face of the larger box, make a small hole in the middle.
(3) In the smaller box, cut out from the middle a square with a side of about 5 to 6 cm.
(4) Cover this open square in the box with tracing paper (translucent screen).
(5) Slide the smaller box inside the larger one with the hole, in such a way that the side with the tracing paper is inside
Now it is ready to use
How to use it
(1) Hold the pin hole camera look through the open face of the smaller box. You should use a piece of black cloth to cover your head and the pinhole camera.
(2) Now focus on the object you want to capture in the camera. Make sure that the objects you wish to look at through your pinhole camera are in bright sun shine.
(3) Move the smaller box forward or backward till you get a picture on the tracing paper pasted at the other end

How the Images looks like pin-hole camera?
Upside down (inverted) images are formed. Image in a pin hole camera is real , inverted and smaller in size.

A pinhole camera that is used to capture the images of the sun is called Solography.
Natural Pin-hole Camera

When we pass under a tree covered with large number of leaves, we notice that small patches of sun light under it. These circular images are, in fact, pin hole images of the Sun. The gaps between the leaves, act as the pin holes. These gaps are all kinds of irregular shapes, but, we can see circular images of the Sun. This is called Natural Pin-Hole Camera
Rectilinear Propagation of Light

Figure 5: Property of light.
Producing a Beam of Light