Activity–3
AIM : To show sedimentation, decantation and filtering process.
Materials required : (i) Water (ii) soil (iii) piece of cloth (iv) filter paper
Method : Mix some soil to water in a glass. Let it stand for half an hour. Observe the water carefully and note the observations. Now, slightly tilt the glass without disturbing the water. Let the water from the top flow into another glass. Now filter the water through a piece of cloth. In a piece of cloth, small holes or pores remain in between the woven threads. These pores in a cloth can be used as a filter. If the water is still muddy, impurities can be separated by a filter that has even smaller pores. A filter paper is one such filter that has very fine pores in it. Solid particles in the mixture do not pass through it and remain on the filter.

(vi)  Evaporation :
The process of conversion of water into its vapour below its boiling point is called evaporation. The process of evaporation takes place continuously wherever water is present.
Sea water contains many salts mixed in it. One of these salts is the common salt. When sea water is allowed to stand in shallow pits, water gets heated by sunlight and slowly turns into water vapour, through evaporation. In a few days , the water evaporates completely leaving behind the solid salts. Common salt is then obtained from this mixture of salts by further purification. 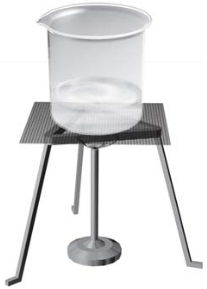 The removal of substances from a mixture of two or more substances is known as Separation.

Some Examples of Separation are:

On a day-to-day basis, we are faced with various instances when we are required to separate substances from one another. Whether it is picking out chilies from our parathas/poha or separating tea leaves from tea while serving it, the need for separation of substances is something we encounter on a daily basis. It is usually because of one or all three of the following reasons:

To separate two dissimilar but useful elements like in the case of butter and milk. Milk is churned in order to obtain butter.

To segregate useless elements from the useful ones like in the case of separating tea leaves from tea.

To remove and discard impurities or potentially harmful substances like picking out small pieces of stones and other impurities from rice and wheat.

Problems arise when the materials to be separated are really small in size or differ in their composition. It is nearly impossible to separate grains of salt from grains of sand by hand or trying to separate oil from water. We might need to use methods other than simple handpicking even though for a lot of separation processes, even handpicking might be enough.

Why do we need to separate substances?

What is a Substance?

A substance is a piece of matter with certain features and characteristics.

Pure Substances: The substances which contain only one type of particles.

Impure Substances: The substances which contain more than one kind of particles.

Impurities are undesired/ unwanted particles in a substance that cause it to be impure.

Element is a substance made up of the same material's identical particles.

Compound is a substance created by the chemical reaction of two or more elements in a specific ratio.

Figure 3 A group of individuals separating two types of grains

Threshing is also done with the help of machines like the combine harvester (Fig. 3.2). Threshed grains may still contain seed coverings and tiny pieces of leaves or stem (collectively called chaff). These are separated by winnowing.

The stones and pebbles present in the mixture remain in the sieve and the fine sand particles pass through the holes of the sieve.
Figure 6 Sieving

Use of more than one method of separation

Often, we are faced with mixtures and solutions that cannot be separated by use of a single separation technique. A number of such techniques need to be applied simultaneously to achieve the desired result.

Take for example the case of a salt and sand mixture. We know handpicking will not work and considering both of them weigh just about the same, neither will winnowing.

And hence we try to separate the two with the help of filtration or decantation.

We take a beaker and add water to the said mixture of salt and sand. While the salt dissolves in water, the sand deposits at the bottom of the beaker and can be separated from the salt solution with the help of a filter paper or by gently pouring the salt solution in another container. We now have to separate the salt from water, for which we will simultaneously use the methods of evaporation and condensation. While heating the solution in a kettle, we observe that vapour or steam starts to rise from the spout of the kettle. What we then do is allow this steam to come in contact with a metal plate which has some ice on it. When this happens, the steam gets converted to small drops of water which we transfer to another container and thus successfully manage to separate salt which gets left behind in the kettle and the water which we collect in a separate container.

Condensation is the defined as the simple process of converting gas or vapour to its liquid form by decreasing the temperature or pressure exerted on it. This is what we did when we allowed the steam to come in contact with the cold metal plate

Figure 9 Use of more than one method of separation

Can Water Dissolve Any Amount of a Substance?

Even though water can dissolve a number of substances and solutions in it, it has a limit to how much it can dissolve. After a certain point, it stops dissolving any more of that substance and the substance collects at the bottom of the vessel. We say that the solution has become saturated.

A saturated solution is one that contains the maximum possible concentration of a particular solute. For example, if we continue to add increasing amounts of salt to a small quantity of water, there will come a point that the salt will not get mixed with the water and instead deposit at the bottom. At this point, we say that the solution has become saturated i.e. it is now incapable of dissolving any more of the given solute which is in this case, salt.

One way of ensuring that the given amount of water takes more salt even after it has reached its saturation point is by heating the said water. This is because heating the solution helps to increase the solubility of salt or any solute and hence more amount of the same solute can now be dissolved in the same amount of water.

Churning: The process of shaking milk or cream in order to allow lighter particles to come to the surface in order to make butter is called churning.

Pure Substance: This can be defined as a substance composed of only a single type of particle.

Impure Substance: A substance composed of more than one type of particles.

Sublimation: When a solid directly gets converted into vapour, this process is known as sublimation.