The Living Organisms Characteristics and Habitats

CHARACTERISTICS OF LIVING THINGS
•  Definite Shape and Size
Each kind of living being possesses a characteristic form and size. For example, a dog always has a form different from a bird. Different breeds of dogs may vary slightly in height and other features but they all have a more or less similar form.

•  Living Things are Made up of Cells
Just as a building is made up of stones or bricks, all living organisms are made up of cells. Non-living objects do not have cellular structure. Cells are too small to be seen without a microscope. Some plants and animals consist of only a single cell and are called unicellular organisms. Some examples of unicellular organisms are: amoeba, paramecium, bacterium and yeast. There are other plants and animals whose body is made up of many cells. They are called multicellular organisms. Man, cat, pine, rose plant, etc. are such organisms.
•  Living Things Move
Movement is one of the most important signs of life. Most animals move about freely from place to place. This is called locomotion. They move from place to place to find food, shelter and to escape from their enemies.Plants remain fixed to the soil at one place. They show movements of their parts. Roots always grow towards soil and shoot towards light. Opening and closing of stomata and flowers are other examples of plant movemens.

•  Living Things are Sensitive
You show some immediate response to the situations you are facing. The dust particles, the hot object and the delicious dish are the stimuli. Closing and rubbing of eyes, withdrawing of hand, and water in the mouth are the responses.
All living organisms respond to stimuli because of sensitivity or irritability or responsiveness.
Plants also respond to stimuli. Many flowers open early in the morning and close during the day. Rat-ki-rani flowers open at night and close during the day. The leaves of the Mimosa the sensitive ‘Touch-me-not’ plant, fold and droop on touchin. 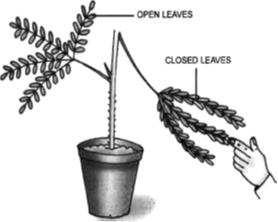 •  Living Things Need food to Live
Different living organisms have different methods of getting food. All green plants can make their own food with carbon dioxide, water, chlorophyll and sunlight. The process is called photosynthesis.
Animals cannot make their own food. Th depend upon other living or dead organisms for their food. Goats, cows, buffaloes, sheep, rabbits and elephants eat only plants and are called herbivorous animals. Lions, wolves and leopards are called carnivorous animals because they feed on the flesh of other animals. Omnivorous animals like man, bear, etc. eat plants as well as animals.

•  Living Things Excrete
All living organisms get rid of the waste and other harmful substances formed in their bodies. This process is called excretion. Human beings get rid of waste products from their bodies as urine, sweat, exhaled air, and as solid wastes in the form of faeces.
All animals have special organs for excretion. Kidneys, lungs, gills and sweat glands are the excretory organs of animals.
Plants throw out their gaseous waste products through small openings which are present in their leaves. These openings are called stomata. The other excretory products of plants are gums and resins.

The Living Organisms Characteristics and Habitats

Environment: Everything that we see surrounding us; living, non-living, physical, chemical etc. is called as environment

Organisms and The Surroundings Where They Live

A journey through different habitats