Introduction
The term ‘Geometry’ is the English  equivalent of the Greek word ‘Geometron’. ‘Geo’ means Earth and ‘metron’ means Measurement. Here, we will discuss some basic concepts in geometry.

Geometry has a long and rich history. The term 'Geometry' is derived from the Greek word 'Geometron'. Geometry is the branch of mathematics which deals with the measurement, properties and relationships of points, lines, angles, surfaces and solids. So here we are going to learn about,

In geometry, dots are used to represent points. A point is used to represent any specific location or position. It neither has any size, nor dimensions such as length or breadth. A point can be denoted by a capital letter of the English alphabet. Points can be joined in different ways.

Line :
A line is made up of an infinite number of points that extend indefinitely in either direction. Two points determine a line. For example, if a line segment from M to N is extended beyond M in one direction and beyond N in the other, then we get a line, MN. It is denoted by←−→ MN MN↔. A line can also be represented by small letters of the English alphabet.

Ray:
A ray is a portion of a line. It starts at one point and goes on endlessly in one direction. For example, if a line from A to B is extended endlessly in the direction of B, then we get a ray, AB. It is denoted by −−→ABAB→and can be read as ray AB.

Plane:
A plane is said to be a very thin flat surface that does not have any thickness, and is limitless. A plane is always represented by a minimum of three points.
For example, the sheet shown below is said to be plane ABC. An infinite number of points can be contained within a plane.

Curve and it types

Curves:
Curves can be defined as figures that flow smoothly without a break. A line is also a curve, and is called a straight curve.

Simple curves:
Curves that do not intersect themselves are called simple curves.

Open curves
Curves whose end points do not meet are called open curves.

For a closed curve, we can identify three regions

Collinear Points
Three or more points are said to be collinear, if there is a line which contains them all.

In the above figure; P, Q, R are collinear points.

5. INTERSECTING LINES
Two lines having a common point are called intersecting lines. The point common to two given lines is called their point of intersection. In the figure, the lines AB and CD intersect at a point O. 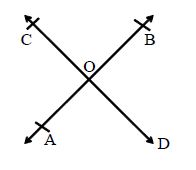 6. PARALLEL LINES
Two lines l and m in a plane are said to be parallel, if they have no point in common and is written as l || m. The distance between two parallel lines always remains the same.

POLYGONS
Simple closed curves made up of only line segments are called polygons. Line segments that form the polygon are the sides of the polygon. Any two sides with a common end point are called the adjacent sides. The point of intersection of a pair of sides is called a vertex. The end points of the same side are adjacent vertices. The line segment joining any two non-adjacent vertices of a polygon is a diagonal. ABCDEF is a polygon. 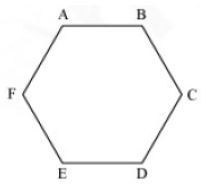 The line segments AB, BC, CD, DE, DF, and FA are known as the sides of the polygon ABCDEF.
Any two sides with common end points are called adjacent sides. AB and BC are adjacent sides with common end point B.
The meeting point of a pair of sides of a polygon is known as vertex. In the polygon ABCDEF, sides AB and BC meets at point B. So, point B is called the vertex of the polygon. Similarly, the other vertices are A, C, D, E, and F.
The line joining any two non-adjacent vertices of a polygon is known as its diagonal. In the following polygon ABCDEF, the diagonals are AC, AD, AE, BD, BE, BF, CE, CF, and DF. 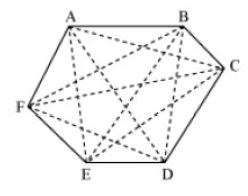 ANGLES
An angle is made up of two rays starting from a common end point. 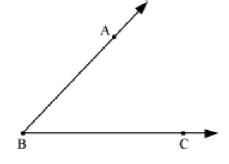 Triangle
TRIANGLES
A polygon made up of three line segments is called a triangle.

The triangle in the diagram is Δ∆PQR. Points P, Q and R are the vertices. PQPQ , QRQR and RPRP are the sides, and ∠∠PQR, ∠∠QRP, ∠∠RPQ are the angles of the triangle. A triangle has an interior and exterior.

QUADRILATERALS
A quadrilateral is a four-sided polygon. 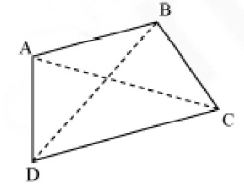 Circle and its parts

A circle is formed by a point moving at the same distance from a fixed point. The fixed point is the centre of the circle. A circle is also a simple closed curve however; it does not have any sides or angles. 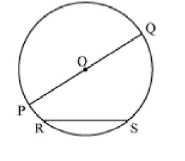 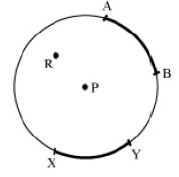 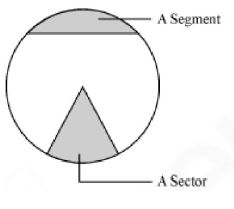 Semi-circle
A diameter of a circle divides it into two halves. Each half is called a semi-circle.

Circle
A circle is a simple closed curve all of whose points are at the same distance from a given point O in the same plane . The given point O is called the centre of the circle.
It has some very special properties. 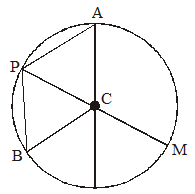 Each of the segments CA , CP , CB, CM is radius of the circle. The radius is a line segment that connects the centre to a point on the circle. CP and CM are radii (plural of ‘radius’) such that C, P, M are in a line. PM is known as diameter of the circle. Diameter is a double the size of a radius.
PB is a chord connecting two points on a circle.
An arc is a portion of circle. 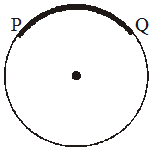 If P and Q are two points we get the arc PQ. We write as . 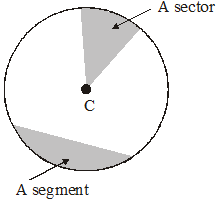 A region in the interior of a circle enclosed by a chord and an arc is called a segment of the circle. The distance around a circle is called its circumference. 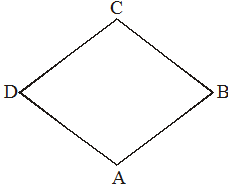 TRIANGLES
A triangle is a three-sided polygon. In fact, it is the polygon with the least number of sides.
We write ∆DABC instead of writing Triangle ABC. The three sides of the triangle are AB , BC and CA . The three angles are ∠BAC, ∠BCA and ∠ABC. The points A, B and C are called the     vertices of the triangle.

. Angle POQ is thus a better way of naming the angle. We denote this by ∠POQ. 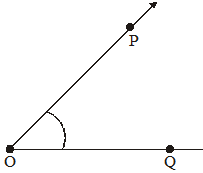 In specifying the angle, the vertex is always written as the middle letter.

Polygons
A figure is  a polygon if it is a simple closed figure made up entirely of line segments.
For example, triangle, quadrilateral, pentagon, etc., are all examples of polygon.

If all sides of a polygon are equal and all angles are also equal , then it is called a regular polygon.

Sides, Vertices and Diagonals
The line segments forming a polygon are called its sides.

The meeting point of a pair of sides is called its vertex. 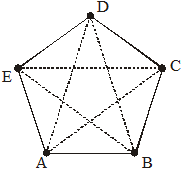 meet at E, so E is a vertex of the polygon ABCDE. Points B and C are its other vertices.
Any two sides with a common end point are called the adjacent sides of the polygon. Sides

Curves
When we draw lines on a piece of paper without  lifting the pencil and without using a scale, the shapes that we get are called curves.
Simple Curve : A curve that does not cross itself is called a simple curve. The figures  shown below are simple curves.

Open Curves : The figures that do not begin and end at the same point are called open curves.

Closed Curves : The figures that begin and end at the same point are called closed curves.
For example : triangle, circle, rectangle, square, etc. are all closed figures.

RAY
A ray is a portion of a line. It starts at one point (called starting point) and goes endlessly in a direction.
Look at the diagram of ray shown here. Two points are shown on the ray. A is the starting point,  P is a point on the path of the ray.

(b)     Parallel Lines : If two or more lines do not meet each other however far they are extended, then they are called paralle lines.

(c)     Collinear Points : Three or more points in a plane are said to be collinear if they all lie on the same line.
In Fig, points A, B, C and D are collinear because only one line l passes through all of them.

If the points do not lie on a line, they are called non-collinear points.

. It extends indefinitely in both directions. So it contains a countless number of points. (Think about this). Two points are enough to fix a line. We say ‘two points determine a line’. The adjacent diagram (figure) is that of a line AB written as

Sometimes a line is denoted by a letter like l, m. 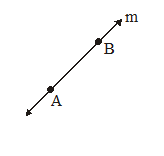 POINTS
A point determines a location. If we mark three points on a paper, we would be required to distinguish them. For this they are denoted by a single capital letter like A, B, C.
These are some models for a point :

These points will be read as point A, point B and point C.           Of course, the dots have to be invisibly thin.
A point has no length and no breadth.