Introduction
All the shapes we see around us are formed using curves or lines. We can see corners, edges, planes, open curves and closed curves in our surroundings. We organise them into line segments, angles, triangles, polygons and circles. In this chapter we have to compare and measure their sizes.

Babilonians used geometry during the period 3000 BC to 2000 BC. They found formulae for areas and perimeters of rectangle and square. To mark the boundaries of the fields that were affected by the floods due to the over flow of river Nile and to compute their areas, geometry came to help of Egyptians. From ancient Vedic times geometry got special importance in our country. Geometry was developed as a science along with astronomy in our country. ‘Kalpa’ is a part of vedas. Later on, geometry was developed as ‘sulbha sutras’. Great people like Boudhayana, Apasthambha, Katyana etc., became famous authors of such ‘sulbha sutras’.
Basic Geometrical Concepts
Axioms:  The basic facts which are taken for granted without proof are called axioms.
E.g.:
Halves of equals are equal
The whole is greater than each of its parts
A line contains infinitely many points
Statements: A sentence which can be judged to be true or false is called a statement.
E.g.:
The sum of the angles of a triangle is 1800 is a true statement
x + 8 > 12 is a sentence but not a statement
Theorems: A statement that requires a proof is called a theorem. Establishing the truth of a theorem is known as proving the theorem.
E.g.:
The sum of the angles of a triangle is 180°.
Corollary: A statement, whose truth can easily be deducted from a theorem, is called its corollary.
Fundamental Geometrical Terms
Point: A point is a mark of position. A fine dot represents a point. We denote a point by a capital letter A, B, P, Q etc. A point has no length, breadth or thickness.
Line Segment: The straight path between two points A and B is the line segment AB, represented as ABAB.
The points A and B are called its end points.
A line segment has a definite length.

The distance between two points A and B gives the length of the line segment ABAB.
Ray: A line segment AB when extended indefinitely in one direction is the ray AB−→−AB→.
It has one end point A.

A ray has no definite length. A ray cannot be drawn; it can simply be represented on the plane of a paper.

Line: A line segment AB when extended indefinitely in both the directions is called line AB←→AB↔.

A line has no end points. A line has no definite length. A line cannot be drawn; it can simply be represented on the plane of a paper.
Incidence Axioms on Lines 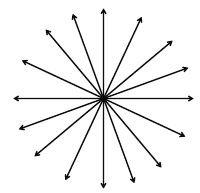 Collinear Points: Three or more points are said to be collinear, if there is a line which contains them all.

In the above figure; P, Q, R are collinear points.
Plane: A flat surface extended endlessly in all the four directions is called a plane. The surface of a smooth wall, the surface of the top of the table, the surface of a smooth blackboard, the surface of a sheet of paper etc. are close examples of a plane. These surfaces are limited in extent but the geometrical plane extends endlessly in all directions. Two lines lying in a plane either intersect exactly at one point or are parallel.
Intersecting Lines: Two lines having a common point are called intersecting lines. The point common to two given lines is called their point of intersection. In the figure, the lines AB and CD intersect at a point O. 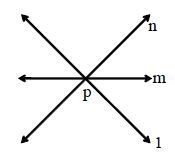 Parallel Lines: Two lines l and m in a plane are said to be parallel, if they have no point in common and is written as l || m. The distance between two parallel lines always remains the same.

Angle and its Angle Types,

OA and OB are called the arms of the angle and O is called as its vertex.
Measure of an Angle: The amount of turning from OA to OB is called the measure of ∠∠AOB is written as ∠∠ AOB. An angle is measured in degrees, denoted by.

Equal Angles: Two angles are said to be equal, if they have the same measure.
Bisector of an Angle: A ray OC is called the bisector of ∠∠AOB, if m ∠∠AOC= m ∠∠BOC. 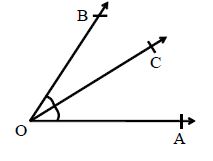 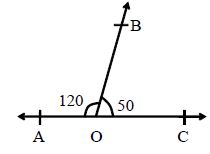 Important Results
Linear Pair Axiom: If a ray stands on a straight line, then the sum of the adjacent angles so formed is 180°. Thus, ∠∠AOC + ∠∠COB = 180° where AOB is a straight line. 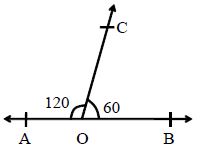 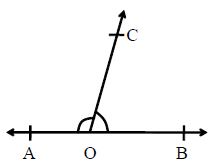 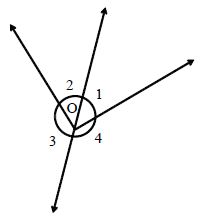 Parallel Lines: Two straight lines lying in the same plane are said to be parallel if they do not intersect no matter how long they are produced on either side. In the given figure, AB and CD are parallel lines and we write AB || CD.

Transversal: A straight line that intersects two or more lines is called a transversal. Let two lines AB and CD are cut by a transversal l, and then the following angles are formed. 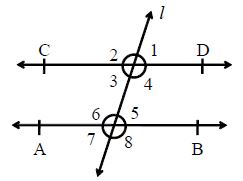 TRIANGLE
A closed plane figure bounded by three line segments is called a Triangle. We denote a triangle by the symbol Δ∆. Δ∆ABC has:
Three vertices, namely A, B and C
Three sides, namely AB, BC and CA
Three angles, namely, ∠A, ∠B and ∠C.

The three sides and the three angles are known as elements or parts of the Triangle.
Kinds of Triangles
Classification of Triangles according to Sides:
Scalene Triangle: A triangle, in which all sides are of different lengths, is called a scalene triangle.
In the following figure, ΔPQR∆PQR is a scalene triangle 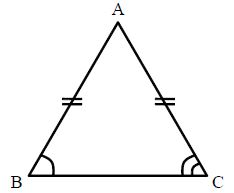 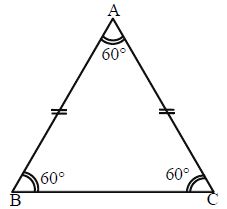 Classification of Triangles according to Angles:
Acute-Angled Triangle: A triangle, in which every angle measures more than 0° but less than 90°, is called an acute-angled triangle. In the below figure Δ∆PQR, we have: ∠P = 70°, Q = 45° and R = 65°.
Thus, each angle of PQR is acute. 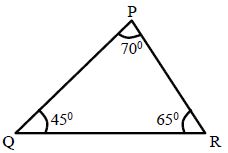 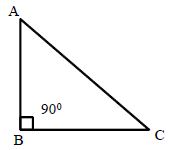 Δ∆ABC is a right triangle and ∠B = 90°, AC is the hypotenuse and AB and BC are its legs.
Obtuse-Angled Triangle: A triangle in which one of the angles measures more than 90° but less than 180° is called an obtuse- angled triangle. 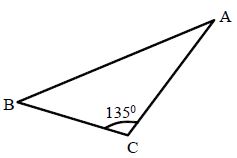 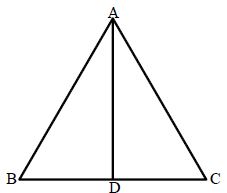 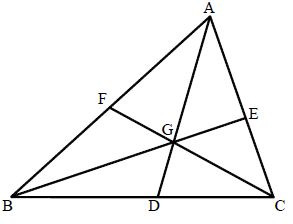 G is the centroid of Δ∆ABC
Altitude: The length of perpendicular from a vertex to the opposite side of a triangle is called its altitude and the side on which the perpendicular is being drawn, is called its base. In the below figure, AL⊥⊥BC.
So BC is the base and AL is the corresponding altitude of the triangle. A triangle has three altitudes. All the three altitudes of a triangle are concurrent i.e., they intersect at a point. 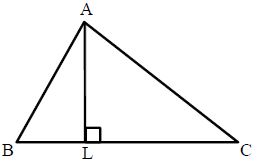 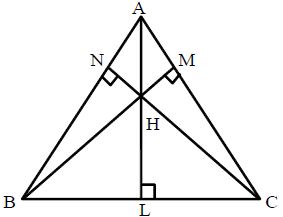 In centre and in circle: The point of intersection of the internal bisectors of the angles of a triangle is called its in centre in the below figure, the bisectors of the internal angles of a Δ∆ABC meet at a point I. So, ‘I’ is the in centre of ABC. The in centre of a triangle is the center of a circle which touches all the sides of the triangle and this circle is called the in circle of the triangle. If ID⊥⊥BC, then ID is called the radius of the in circle. 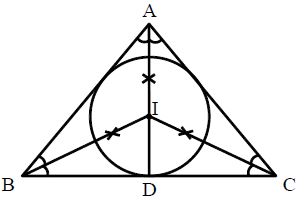