1. Ration and its Comparison

Ratio
A ratio is a comparison of two numbers (quantities) by division. A ratio is usually denoted by the symbol (:). The ratio of a to b (b ≠ 0) is written as a : b or

In the ratio a : b, a and b are called terms of the ratio. 'a' is the antecedent and 'b' is the consequent.
A ratio is a number, so to find the ratio of two quantities they must be expressed in the same units.

Properties of Ratios
(a)     In a ratio, two quantities are compared. So, the quantities must be of the same kind. i.e., they must be expressed in the same units.
(b)     The value of a ratio remains unaltered if the given ratio is multiplied or divided by the same non-zero quantity.
(c)    The order of the terms in a ratio a : b is very important. The ratio 3 : 2 is different from the ratio 2 : 3.

Ratio in the simplest or lowest form :

Comparison of Ratios :
1.    Write the given ratios as fractions in the simplest form.
2.    Find the LCM of the denominators of the fractions.
3.    Convert them into like fractions with same denominators    .
4.    Compare the numerators and arrange the fractions.
5.    Then respective ratios are also in the same order. 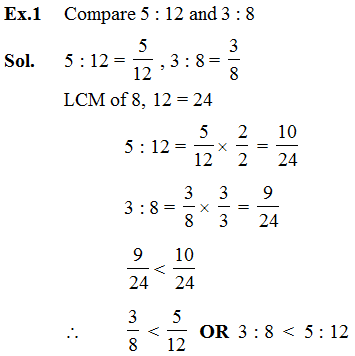 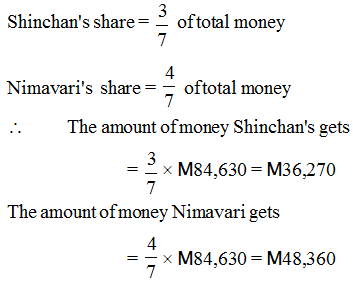 Ratio and its Comparison

It is common to compare two amounts that are of same type. We compare prices of two belongings, height to of two people, size of different belongings, age of people etc.
For e.g. Let the price of a booklet is Rs. 10 and the price of a diary is Rs. 30.

We get that the price of a diary is Rs. 20(Rs30 – Rs10) added than the price of a booklet. However, if we wish to compare the prices of these two belongings again taking the difference is not enough to express the comparison.
Therefore, we use ratio. In many situations, calculating the proportion is considered as an added meaningful way of comparing quantities. It is obtained by using division, i.e. by seeing how many times one quantity is to the other quantity. This method is known as comparison by ratio.

Therefore, the order in which amounts are taken to express their ratio is important.
Another important property of ratio is we can get original ratios by multiplying or dividing the numerator and denominator by the same number.

Properties of ratio
Two quantities can be compared only if they are in same units. Equivalent ratios can be determined by multiplying or dividing the numerator and denominator by the same number.

1. A ratio between two quantities of same kind and in the same units is obtained on dividing one quantity by the other and has no unit. The ratio is independent of the units used in the quantities compared.

2. The ratio must always be expressed in its simplest form or in its lowest terms.