2.3    BASES
These chemical substances are bitter in taste and soapy to touch . The chemical nature of such substances is basic.

Bases which dissolves in water are called alkalis. e.g. KOH, NaOH.
All alkalis are bases but all bases are not alkalis. e.g. Al(OH)3 is a base, but not an alkali. 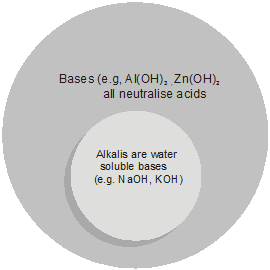 •    Both NaOH and KOH are deliquescent in nature which means that they absorb moisture from air.

Classification of Bases :
(i) On the basis of strength :

(ii) On the Basis of their Concentration :
By the term concentration, we mean the amount of water present in the given sample of alkali solution in water. On the basis of concentration, the alkalis can be classified as under :

(iii) On the Basis of their Acidity :
The number of hydroxide (OH–) ions produced by one molecule of  an alkali on complete dissociation in water or the number of hydrogen ions (of an acid) with which a molecule of that alkali reacts to produce salt and water only is known as acidity of an alkali.

For water insoluble hydroxides, acidity of  the base is equal to the number of OH– ions present in one molecule of that base.
On the basis of acidity, the bases can be classified as under :

(1)  Monoacidic Bases (or alkalis) :
When one molecule of the base on complete ionisation produces one hydroxide (OH–) ion in aqueous solution, the base or alkali is said to be monoacidic base.

A monoacidic base (or alkali) may be defined as one whose one molecule reacts with one hydrogen (H+) ion completely to form salt and water as the only products.

Examples of Monoacidic Bases (or alkalis) :

The dissociation of monoacidic bases or alkalis takes place in a single step.

(2) Diacidic Bases (or alkalis) :
When one molecule of a base or alkali on complete ionisation produces two hydroxide (OH–) ions in aqueous solution, the base or alkali is said to be diacidic.

One molecule of both the bases are producing 2OH– ions in aqueous solution, therefore, these are termed as diacidic bases .

(3) Triacidic Bases :
When one molecule of a base or alkali on complete ionisation produces three hydroxide (OH–) ions in aqueous solution, the base or alkali is said to be triacidic base.

Natural Indicators Around Us