The word camera comes from the Greek kamara, a vaulted chamber. A pinhole camera is the simplest camera possible. It consists of a light-proof box, some sort of film and a pinhole. The pinhole is simply an extremely small hole like you would make with the tip of a pin in a piece of thick aluminium foil.

Rays scatter off objects in all directions. The pinhole in the front of the camera selects only the rays traveling in the direction of the pinhole. These rays pass into the camera and strike the back surface.The front and side walls shade that point on the back from rays coming from different points of origin.

A pinhole camera casts an inverted image on the back. This image will also be slightly blurry, because light coming from one atom on the object spreads out over the back of the camera according to the size of the pinhole. Each disk of light  casts  onto the back overlaps and blurs with disks from nearby atoms.

One can reduce the blur by making the pinhole smaller. However, then the image becomes darker and may not be visible or recordable on film.

1. Phenomenon of path travelled by light and reflection of light from mirror.
Fix a comb on one side of a large thermocol sheet and fix a mirror on the other side as shown in the figure. Spread a dark-coloured sheet of paper between the mirror and the comb. Keep this in sunlight or send a beam of light from a torch through the comb. What do you observe? Do you get a pattern similar to that shown in the figure? 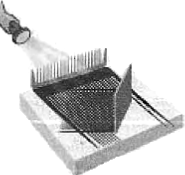 Light travels in straight line and gets reflected from the mirror. Yes, we get a pattern similar to that shown in the figure.

Light travels in a straight line and does not bend with the pipe.