(f) Movement in Fish :
•     Fishes are aquatic animals. Head and tail of the fish are smaller than the middle portion of the body.  This body shape is called stream lined which is helpful to reduce friction during movement. It has caudal, dorsal (impaired), pectoral,  pelvic (paired) fins.
•     Fishes have skeletal & muscular system both. During swimming, muscles make the front part of the body curve to one side and the tail part swings towards the opposite side. Then quickly the body and tail curve to the other side.
•    This makes a jerk and pushes the body forward. A series of jerks make the fish swim ahead. This is helped by fins of the tail.
•    Thus paired fins help in the maintaining balance of body during swimming while impaired provide jerk. Fish lacking bones : In sharks, skeleton is made entirely of cartilage. 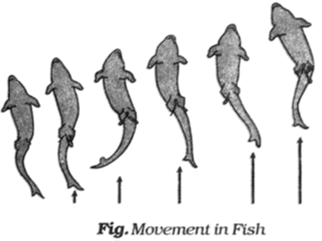 (g) Movement in Snake :
•    Snakes are reptiles which can do creeping movement with the help of skeletal and muscular system. Muscles are interconnected to long backbone, ribs and skin. The snakes body curves into many loops.  Each loop gives it a forward push by pressing against the ground. These movements occur rapidly in its body that show a very fast movement.

(h) Movement in Birds :
•    Birds (Aves) can fly in the air and walk on the ground and some birds like duck can swim in water also. In birds skeletal (with hollow bones) and muscular system are present. Forelimbs are modified into wings. Shoulder bones are strong and breast bones are modified to hold muscles of flight which are used to move the wings up and down. While bones of hind limbs are typical for walking and perching. Dislocation
In spite of good natural articulation of bones to one another, sometimes because of a careless movement or a bad fall, the bones at the moveable joints slip out of their position. This is called dislocation. A person who has a dislocated bone may have a sprained or damaged ligament.