Movement In Different Animals
Movement of Invertebrates
(a) Movement in Amoeba :
Amoeba is an unicellular organism which can move with pseudopodia (false feet).

(b) Movement in Earthworm :
•     It lives in moist soil, water and burrows. Its body is elongated, segmented and bilaterally symmetrical. The body of an earthworm is made up of a large number of segments. An earthworm does not have bones. On the lower surface of its body, a number of tiny hair like bristles are present. These bristles help it to get a good grip on the surface of the ground.
•     Earthworm doesn’t have bones. It has muscle which help in locomotion with setae (hook like chitinous structure). During movement it first extends the front part of the body keeping the rear portion fixed to the ground with the help of setae. Then it fixes the front end and releases the rear end. It then shortens the body and pulls the rear end forward.
•     By repeating such expansions and contractions it can move through soil.

(c) Movement in Snail :
•     Snail is a molluscan which doesn’t has bones but has muscles. A shell is present as outer skeleton During movement a thick muscular foot comes out of the shell’s opening.

•    The foot produces a slimy substance called mucous. It crawls smoothy on the layer of mucous. The foot is present under its belly. It looks as if the snail is moving on its belly. A trail of mucous is left behind when it crawls on a surface. By the contraction & expansion of the foot muscle it can do slow movement at a substratum. (d) Movement in Cockroach :
•     Cockroach is an arthropod which has jointed appendages. It has three pair of legs and two pairs of wings attached to the thorax.

•     These legs help it to run very fast. The body of a cockroach is covered with a hard outer skeleton.
•    There are two pairs of wings attached to its breast. It can fly only short distances. Thus, a cockroach can walk, climb as well as fly in air. 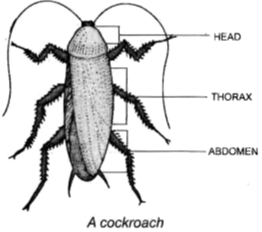