ELECTRIC CIRCUIT
The path of flow of electricity starting from one terminal of cell and returning to the other is called an electrical circuit. It consists of conducting wires and other resistances (like lamps etc.) between the terminals of a battery, along which an electric current flows. 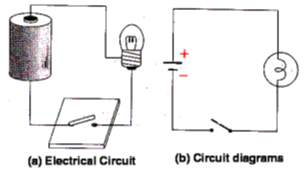 (b)     Closed Circuit : An electric circuit through which electric current flows continuously is known as closed circuit.

Ex.3    Look at the circuit given in figure (a) and figure (b). Read the instructions in each case and answer the questions given.