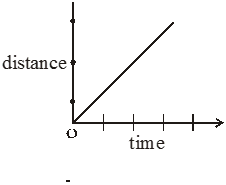 A straight line is obtained. Which mean that its a uniform motion and the speed of the object is constant.
While ploting a graph, one must keep in mind.
(a)    The difference between the highest and the lowest values of each quantity.
(b)    The intermediate values of each quantity, so that with the scale chosen, it is convenient to mark the values on the graph.
(c)    To utilise the maximum part of the paper on which the graph is to be drawn. 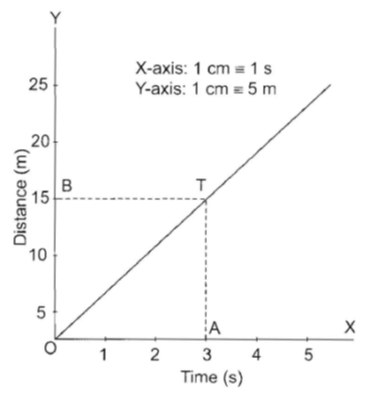 2.    Collect information about time-measuring devices that were used in the ancient times in different parts of the world. Prepare a brief write up on each one of them. The write up may include the name of the device, the place of its origin,          the period when it  was used, the unit in which the time was measured by it and a drawing or a photograph of the device, if available.
(i)     Rolling Ball clock. invented in 17th century by French engineer Nicolas Grollier. unit of time-15 seconds-1 min.
(ii)     Candle clock.
used as early as A.D. 520 in China
unit of time-30 min to hrs.
(iii)     Water clock
used in 16th century B.C. in Babylon
Uses steady flow of water to keep track of time.

3.    You can perform an interesting activity when you visit a park to ride a swing. You will require a watch. Make the swing oscillate without anyone sitting on it. Find its time period in the same way as you did for the pendulum. Make sure             that there are no  jerks in the motion of the swing. Ask one of your friends to sit on the swing. Push it once and let it swing naturally. Again measure its time period. Repeat the activity with different persons sitting on the swing.
(i)     Compare the time period of the swing measured in different cases.
(ii)     What conclusions do you draw from this activity?
(i)  Time is same in every case.
(ii)  Time period does not depend upon mass.
4.    To make an hourglass or sand clock :
•     Take two transparent plastic bottles of equal size.
•     Cut a cardboard disc large enough to cover the mouths of the bottles and make a small hole in the centre of the cardboard.
•     Put some sand in one bottle and place the cardboard disc on its mouth.
•     Now invert the other bottle over the disc and with the help of a tape, seal the mouth of the two bottles as shown in figure. You r sand clock is ready. Invert the sand clock and watch the flow of sand. Note the time taken by the sand to flow from the bottle          on top to the bottle at the bottom. Repeat the procedure. Note the time taken in each case.There is no difference in the time taken for the bottle to empty in both cases. You can measure a particular span of time with this sand clock.

5.    To observe slow and fast motion and calculate the average speed :
•     For this activity, you can use the football field or even the playground.
•     With the help of a measuring tape, measure and mark a distance of 200 metres.
•     Now ask your friends/classmates to travel this distance:
(a) walking slowly
(b) walking briskly
(c) running
(d) on a bicycle
•     Measure the time taken by each one to travel this distance with the help of a stopwatch and note your observations as shown in the example in Table.

Time taken to cover a distance of 200 metres

6.    To find the speed of a moving ball :
•     Take a ball, a measuring tape, a stopwatch and three of your friends to a playground.
•     Put a mark or line on the ground and ask your friends to gently slide or throw the ball in one direction from this mark.
•     When the ball comes to rest, mark this position also.
•     Now measure the distance between the two markings which gives the distance travelled by the ball.
•     Also measure the time taken by the ball to reach the state of rest with the help of the stopwatch.
•     Put the values of distance and time taken in Table against the name of the boy/girl and also calculate the speed as shown in the given example.

Table : Distance travelled and time taken by a moving ball