Root
The roots help in holding the plant firmly in the soil they are said to anchor the plant to the soil.

Types of Roots
(1) Tap roots        (2) Fibrous Roots
1.    Tap root system : When a dicot seed (seeds with two seed leaves) germinates, the radicle gives rise to a long deep - seated root. It is thick and large this is called the primary root or tap root.
•    The primary root gets divided into branches which are known as secondary roots.
•    The branches of secondary roots are called tertiary roots
•    The primary root is longer than its branches and grows vertically downward into the soil.
•    It is found in most of the dicot plants like castor, pea, mango, gram and beans. 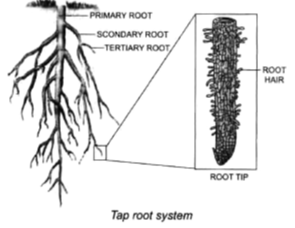 2.    Fibrous Root system.
•    In the fibrous root, the primary root is short - lived and is replaced by a cluster of thin fibre like roots. These are called fibrous roots.
•    These roots spread from a common point and are about the same size.
•    They spread out in the soil and give firm support to the plant.
•    They are found in most of the monocot plants.(Plants that have seeds with single seed - leaf) Like wheat, maize, barley and grasses. Function of Roots
1.    Fixation : It fixes the plant firmly in the soil.
2.    Absorption : The root hairs help in the absorption of water and minerals from the soil.
3.    Prevention of soil erosion : Roots bind the soil finely and prevent soil erosion
4.    Storage : In plant like carrot, turnip, radish and sweet potato and tapioca, the roots are modified for the storage of food.

Supporting Roots
•    In plants such as black pepper, money plant and betel the roots help the plant to climb up a support as the stems are too weak to stand on their own Hence they are known as climbing roots
•    In plant such as banyan new roots grow downwards from the main stem or branches.These are aerial roots that grown towards the soil and act as pillar to support the plant. They are known as prop roots.

Fig. Modification of roots for support