We have learnt how to collect the information and how to organize it using a frequency table. To represent the study of this data, we can draw graphs for this data.
Pictographs and bar graphs are simple ways of representing this data.

1.    Pictograph : A pictograph represents data through pictures of objects. It helps answer the questions on the data at a glance. We represent the data using pictures as following example :
Ex.    A cupboard has five compartments. In each compartment a row of books is arranged. The details are indicated in the adjoining table :

By seeing above pictograph we can easily get information that Row 4 has the greatest number of books. Row 3 has the least number of books and no Row which does not have books.
Interpretation of a Pictograph :
Ex.1     The following pictograph shows the number of absentees in a class of 30 students during the previous week :

(a)     On which day were the maximum number of students absent?
(b)     Which day had full attendance?
(c)     What was the total number of absentees in that week?
Sol : (a)Maximum absentees were on saturday. (There are 8 pictures in the row for saturday; on all other days, the number of pictures are less).
(b)     Against thursday, there is no picture, i.e. no one is absent. Thus, on that day the class had full attendance.
(c)     There are 20 pictures in all. So, the total number of absentees in that week was 20.

Ex.2     A survey was carried out on 30 students of class VI in a school. Data about the different modes of transport used by them to travel to school was displayed as pictograph. What can you conclude from the pictograph?

Drawing a Pictograph :
Ex.3    The following are the number of electric bulbs purchased for a lodging house during the first four months of a year. 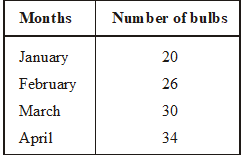