DESCRIPTION OF A FOREST
•    Crown: Branchy part of a tree above the stem is known as crown. These crowns are of different types, sizes and create several horizontal layers in the forests.
•    Canopy: It is the topmost layer of crown of leaves and branches of very tall trees. When viewed from above, the canopy appears as a green cover forming a roof of umbrella over the forest and land.
•    Understories: Area of forest which grows in shade of canopy is known as understory. It include shrubs, herbs and tall grasses. The lowest layer is formed by herbs.
•    Forest floor: It is the ground surface of the forest. It is formed of soil and remains covered with dead and decaying leaves, fruits, seeds, twigs, small herbs, fungi etc. Therefore, the forest floor appears dark and rich in nutrients.
•    Microorganisms obtain their food from the dead and decaying matter and convert it into a dark-coloured humus. The microorganisms which convert the dead plants and animals to humus are called decomposers. Microorganisms help in cycling of                     nutrients and their return to the soil.

IMPORTANCE OF FOREST IN NATURE:
(i)    Forests are called Nature’s lungs because green plants release oxygen during photosynthesis. This oxygen is used by animals. Forest maintain balance of oxygen and carbon dioxide in the atmosphere. If forest get depleted, the ratio of oxygen and                  carbondioxide will get disturbed and will cause a threat of life.
(ii)    Forests regulate climate by reducing temperature and help in rainfall.

(iii)    Forest help in reducing pollution and global warming.
(iv)    Forest control and prevent flood by holding water and not allowing its free flow.
(v)    Forest control soil erosion.
(vi)    Many medicinal plants like neen, cinchona (source of quinine) are found in forest.
(vii)    Forest is source of food. It provides us food & fodder, fuel, fibre, fertilizer and furniture.
(viii)    Forests also provide rubber, gum, resin, nonedible oils, honey, bee wax, lac, bamboos, etc.
(ix)    Some ancient Tribes live in forest.
(x)    Forest serve as habitat for wildlife also helps in balancing the atmosphere.
(xi)    Maintain the supply of nutrients : Forests which harbour producers, herbivores, carnivores and decomposers are a dynamic living entity, full of diverse forms of life and interactions among them.
(xii)    Serve as a source of tourism and recreation : A lot of people are attracted to forests for hiking, camping, research and various other outdoor activities.

Component of forest
(A)    Producers — Green plants or Autotrophs produce food by photosynthesis. All animals depend on plants. Plants also maintain oxygen and carbon dioxide ratio in the atmosphere. 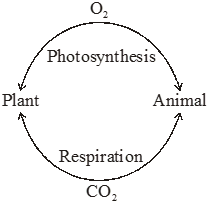 (B)    Consumers — Heterotrophic that can’t make their own food. On the basis of Food habit they are three types:
•    Herbivores
•    Carnivores
•    Omnivores

(C)    Decomposers:
(i)    The Microorganisms like bacteria and fungi that convert dead and decaying animals and plants into humus are called decomposers. They ensure that the nutrients of dead plants and animals and rotten leaves are released into the soil because of that             the top most layer of soil is most suitable layer for plant growth.
(ii)   The leaves, flowers, fruits, etc are converted into humus  by decomposers on coming in contact with water, humus release nutrients into the soil. These nutrients make the soil fertile.