(ii) Silk :
Silk is an animal fibre derived from silkworms. Silk is produced by a moth (species) known as silk moth. The scientific name of silk moth is “Bombyx mori”.
The breeding of these silk moths for production of silk is known as “sericulture”.
(a)    Production of Silk :
The female species of silk moth lays eggs on leaves. After 20 days, eggs hatch into larvae. these hatched larvae are known as Silkworms or Caterpillars.
(i) The silkworms are fed on mulberry leaves for about 6 weeks. As a result, they grow in size and enter their next life cycle called Pupa. Pupa holds itself by weaving a net around its body by swinging its head in figure of eight (8). While swinging their head, silkworm secretes a wet sticky substance. This substance is made up of protein, which hardens on exposure to air and becomes silk fibre. This way silkworm covers itself completely in the covering known as Cocoon. By the time of completion, cocoon pupa, develops into Adult Moth.
(ii) After complete development of silkworm, the cocoons are gathered and kept under the sun or boiled or exposed to steam, Boiling releases the silk fibres from cocoon. The silk fibres from many cocoons are brought together to form a single silken thread. This process is known as Reeling of silk. Reeling is done in special machines which unwind the fibres of silk from the cocoons.
(iii) Broadly, 3 grades of silk is obtained from a cocoon. The unwound fibres form the finest quality silk called the reeled silk. It is dazzling white in colour. Silk that remains after the reeling process from the damaged or waste cocoon is carded and combed. It constitutes an inferior quality of silk called the spun silk. It is slightly honey-coloured. After carding or combing, the short fibres which are left behind constitute an even inferior quality of silk called the Nail Silk. It has rough texture as compared to reeled and spun silk.
(iv) Throwing is the process by which the obtained silk fibres are twisted into a strand for weaving to prevent silk yarn from splitting into individual fibres. These strands are industry ready to be turned into clothes. (b)    Summary of sericulture •    Silk is considered the queen of fibres. It is used for making dress materials, saris, scarves, jackets, gloves and carpets.
•    Silk fibre is mainly made of two proteins : sericine and fibroin
•    Pheromones : These are chemical secreted by an insect to attract the attention of other members of its species.

•        Semi-synthetic fibres :
These are obtained from naturally occurring fibres by chemical modifications. For example, cellulose on reaction with acetic anhydride in the presence of concentrated sulphuric acid gives cellulose diacetate, which is used for                        making   threads of acetate and other materials like films and glasses.
•        Synthetic (artificial) fibres :
Synthetic fibres are manufactured by man in the laboratories. For example: nylon, acrylic and polyester. 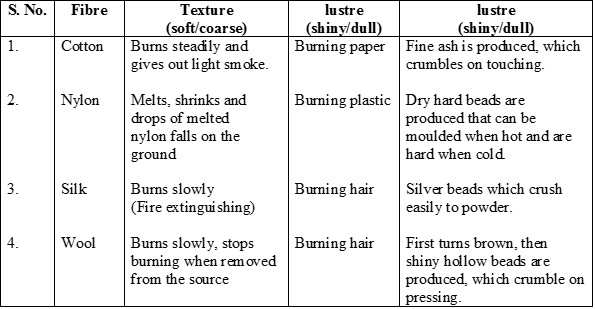 Silk is one of the most delicate, popular, strong, soft, shiny, and expensive fibres obtained from silkworms. The rearing of silkworms for obtaining silk is called sericulture. The steps in the life cycle of a silkworm are Egg → Silkworm → Pupa → Adult Moth. When a female moth lays eggs, its life cycle starts, and larvae secrete a fine filament made of fibroin protein that forms cocoons.