Activity–1
To observe a physical change with the help the of ice cubes.

Procedure :
• Take a few ice cubes in a beaker.
• Keep them in the open for 4–5 minutes.
Now ,we will observe that ice (solid) changes into water (liquid). There is a change in the state of ice from soild to liquid.
• Now pour this water back into the ice tray and keep it in the freezer for 30 minutes.
Now, we will get back the ice. Therefore, it is a physical change.

Activity–2
To observe a physical change  with the help of a sugar solution.
Procedure :

Characteristics of physical change
(i) No new or different product is formed : The composition of molecules of the substance remains unaltered.
Example : Ice melts to form water. In this example only the appearance (state) of matter has changed from solid to liquid. However, the composition of the molecules of ice or water remains same, i.e., for every 1 g of hydrogen, 8 g of oxygen is required .        Thus, only a physical change has occurred.

(ii) The change is temporary and is usually reversible : It means the change can be reversed by altering the causes which produce the change.

Example : The water formed from ice can be changed back to ice by placing it in a freezing mixture (a mixture of ice and common salt). 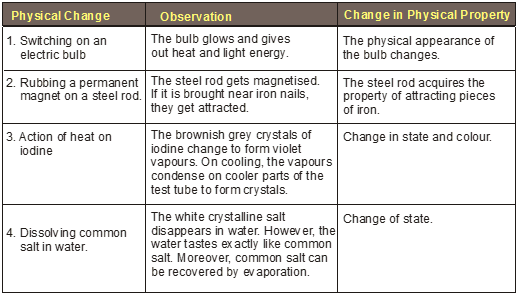 Some Common Examples of Physical Changes

•     Crystallisation of sugar from its solution.