1.    To show that air exerts pressure :
Take a tin can with a lid and fill it two-thirds with water.
• Heat the water on a burner till the water starts boiling.
• Now put off the burner, cover the mouth of the can with its lid tightly and pour cold water on the hot can as shown in figure.
You will observe that the tin loses its shape.
When the water in the can is heated, it changes into vapour form. When cold water runs over the tin can containtng hot water, some of the steam in the can turns back to its liquid state, reducing the amount of air inside. This reduces the air pressure                inside the can compared to the air pressure outside. As a result, the can gets compressed or deshaped.

2.    Pumping of the air :
We use air pump to fill the air into cycle tires and some times football. In pumping,air  inside the pump cylinder get pressed by the moving the piston down and subsequently forced inside the cycle tire tube or football through a valve.If we just close the            out let of pump with a finger,then it is very difficult to move the piston rod further down to other end as pressed air has no where to go and exert pressure on the piston thus preventing its further down movement. 4.    Air Expands on Heating :
Take two paper bags or empty paper cups of the same size. Hang the two bags on the rod which is balanced as shown in the figure. Then glow a candle below one of the bags. As the warm air rises up,it pushes the bag above the candle.The disturbance        of the balance suggest that the warm air is lighter than the cold air. Also, it is important to remember that on heating the air expands and occupies more space. When the same thing occupies more space, it becomes lighter.The warm air is, therefore, lighter than the cold air. That is the reason that the smoke goes up.
In nature there are several situations,where warm air rises at a place. The air pressure at that place is lowered. The cold air from the surrounding areas rushes in to fill its place. This sets up convection in air.

5.    To show that high speed wind lifts and blows off articles :
• Take a strip of paper about 15 cm long and 3 cm wide.
• Hold it firmly with your thumb and finger as shown in figure.
• Now blow hard over the paper strip.
You will observe that the other end of the paper strip rises up which was earlier hanging down. When you blew over the paper strip, the increased wind speed reduced the air pressure on top. The pressure below the paper strip was higher and lifted it up.

Figure Change in the shape of ballon

7.    To prove that hot air is light and rises :
• Take two empty paper cups of the same size and hang them in an inverted position on the two ends of a stick.
• Tie a piece of thread in the middle of the stick and hang it so that the two cups are in balanced position.
• Now put a burning candle just below one of the hanging cups and observe the change.
You will observe that the balancing of the two cups is disturbed. The cup under which the candle is lit moves up. The lig-hted candle warms the surrounding air. As a result, the air becomes light and rises and pushes the paper cup up.

1.    Wind: Moving air is called the wind. Winds that move from east to west are called trade winds. Winds that move from west to east are called westerlies. Horse latitudes are the areas of calm or no wind.
2.    Air exerts pressure. It is the pressure which helps the leaves of trees, banners or flags to flutter when the wind is blowing.
3.    Increased wind speed is accompanied by a reduced air pressure.
4.    Air moves from the region where the air pressure is high to the region where the air pressure is low.
5.    Greater the difference in pressure, the faster the air moves.
6.    On heating, the air expands and become lighter.
7.    Warm air rises up, where as the cool air tends to ink toward the earth's surface.
8.    Wind currents are generated due to uneven heating of the earth, for example:
(i) uneven heating between the equator and the poles.
(ii) uneven heating of land and water.
9.   The winds from ocean carry water and bring rain. These are monsoon winds.
10.  Formation of clouds, storms and cyclone is shown in the following flow chart: 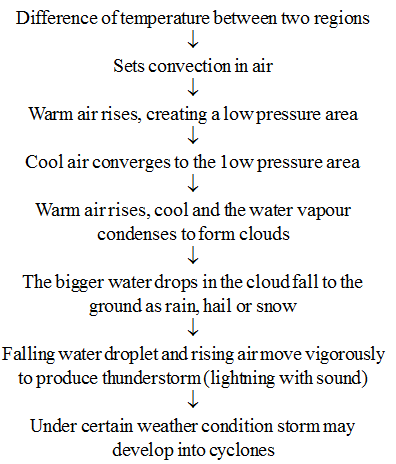 11.    A man-made object that orbits around the earth, the moon or any other celestial body is called satellite. Cyclone detecting radar can locate and track the approaching tropical cyclone within a range of 400 km. Satellites are also useful for monitoring the         cyclones.

12.     Effective safety measures: (Low pressure region with high speed winds around it). A cyclone can be very destructive in its effect. It causes tremendous loss of life and property. Therefore, we should have effective safety measures.
(i)     It has become easier to monitor cyclones with the help of advance technology like satellites and radars.
(ii)     Self help is the best help. Therefore, it is better to plan in advance and be ready with defence against any approaching cyclone.

1.     Anemometer: The instrument that measures the speed of wind is called as -anemometer.

2.     Cyclone: A very low pressure system with a very high speed winds that revolves around is called a cyclone.

3.     Tropical cyclones are called hurricanes in American continent and Typhoon in Japan and Philippines.

4.     Lightning: When two clouds with unlike charges approach each other, charges start moving with high speed through the air in between. When this happens lightning strikes and intense spark of electricity travels in air.

6.     Monsoon winds: The winds from the oceans carry water and bring rain known as monsoon winds.

7.    Thunderstorm: In hot and humid area, the rising temperature produces strong upward rising winds. These winds carry water droplets upwards, where they freeze and fall down again. The swift movement of the falling water droplets along with the                    rising air create lightning and sound. This event is called a thunderstorm.

8.     Tornadoes: A tornado is a dark funnel shaped cloud that reaches from the sky to the ground.

Advancements in satellite and radar has made it easier to see storms that may or are producing a tornado. With the new addition of dual polarization to the national WSR-88D doppler radars, the radar is able to scan a storm twice.