Equivalent Ratio
A ratio obtained by multiplying or dividing the numerator and denominator of a given ratio by the same non-zero number is called an equivalent ratio. A ratio remains unchanged if both of its terms are multiplied or divided by same non zero quantity.
If n  ≠ 0, then : 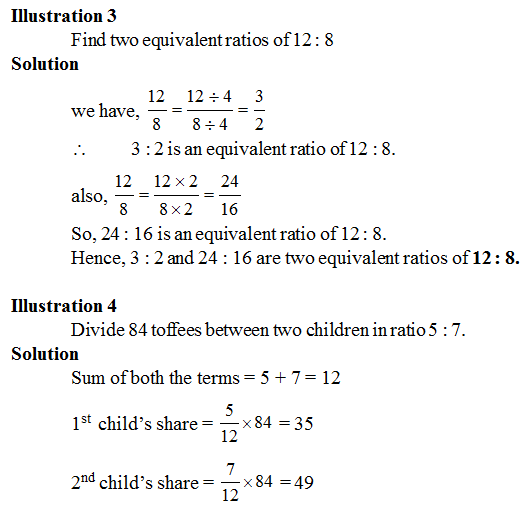 Percentages are essentially fractions where the denominator is 100. To show that a number is a percent, we use the percent symbol (%) beside the number. For example, if you got 75 questions right out of 100 on a test (75/100), you would have scored 75%.

Conversion of per cent into fraction

To convert a per cent into a fraction, divide it by 100 and remove the "%" sign.

2. Conversion of fraction into per cent

To convert any fraction to per cent, multiply it by 100 and put the per cent sign(%).

Conversion of percentage into fraction

To convert the per cent into a ratio, change it to a fraction by dividing it by 100 and removing the per cent(%) sign. Finally, reduce the obtained fraction to the simplest form.

Conversion of ratio into per cent

We can convert the ratio into a percentage using the following method.

Conversion of per cent into decimal

To convert the per cent to decimal, first change it to a fraction by dividing it by 1000 and remove the % sign. Then put the decimal point accordingly.

Conversion of decimal into a per cent

To convert decimal into a per cent, change it to fraction to remove decimal and then multiply it by 100 and put the % sign.

Theoretical explanation about finding a percentage

Percentage of given number =p% of x

Finding the original number from its percent:

Finding how much percent one quantity is of another quantity:

To find what percent of one quantity is of the other quantity if two quantities are given, we proceed as: