Constant :  A term of the expression having no literal factor is called a constant term.

(i)     In the binomial expression 5x + 7, the constant term is 7. In short, a symbol having a fixed numerical value is called a constant.

Variable : A symbol which takes various numerical values is called a variable.

Variable: A variable is a symbol for an unknown value. It is usually denoted in a letter like x, y, a, b.

Constant: A number which stands alone without any variables is known as constant.

Coefficient: A co-efficient can either be a numerical factor or an algebraic factor or product of both that is a number used to multiply a variable.

E.g. Kathir went to a shop to buy chocolate. He gave to shop keeper ₹50 and the shopkeeper gave him 10 chocolates.Now can you find the cost of one chocolate?

Let x be the cost of one chocolate. Then,

Therefore the cost of one chocolate is ₹5.

A product of numbers, variables and their exponents is called a monomial.

A monomial is in a standard form, if first there is a constant (numerical) factor, and then variable factors in alphabetical order. If there are several variable factors with the same base, you multiply them, thus you get one factor for each variable.

When multiplying or dividing a monomial by a number, the coefficient of a given monomial is multiplied or divided, but the variable factors remain the same.

When multiplying or dividing a monomial by a number, multiply or divide only its coefficient.

3x+2y;4xy−6y2
When multiplying or dividing a binomial by a number, each term is multiplied or divided.

To subtract two trinomials , you must:

1) remove the brackets and change the signs of the trinomials that are preceded by the sign "−" to the opposite;

Factors : Each term in an algebraic expression is a product of one or more number(s) and/or literal number(s).

You need to remember 3 formulas:

6. Addition and subtraction of algebraic expressions

6. Addition and subtraction of algebraic expressions

Addition and subtraction of algebraic expressions

The numeric expression refers to any record of numbers, signs of arithmetic operations and brackets, made up with meaning.

1) The amount does not change from a change in the places of the terms, i.e.
a+b=b+a

This is the translational law of addition.
2)To add the third term to the sum of two terms, we can add the sum of the second and third terms to the first term, i.e.
(a+b)+c=a+(b+c)

Division of algebraic expressions
Division is the inverse process of multiplication.
When we divide one expression by another, we find a third expression which when multiplied by the second gives the first , i.e., if a ÷ b = x then a = bx. In a ÷ b = x, ‘a’ is called the Dividend, ‘b’ the Divisor and ‘x’ is called the Quotient.
Rules of Signs in Division :
(i)     When the dividend and the divisor have the same signs, the quotient has the plus sign.
(ii)     When the dividend and the divisor have opposite signs, the quotient has the negative sign.

Division of a Monomial by another Monomial :

Division of a Polynomial by a Monomial :
Divide each term of the polynomial by the monomial and then write the resulting quotients. 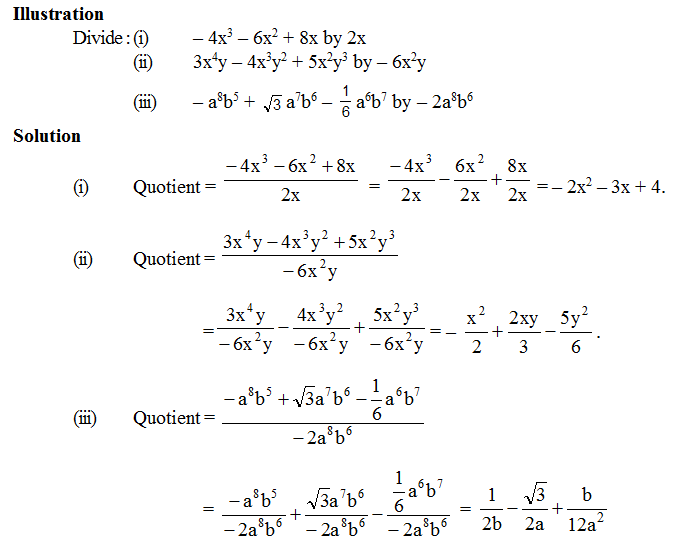 Algebraic identities
An identity is an equality, which is true for all values of the variables. The following three identities are very important.

Applications of the above identities :

Multiplication of algebraic expressions
Following rules of signs and the laws of exponents used in multiplication. 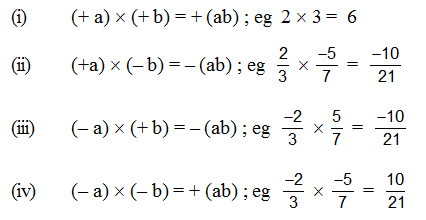 Thus in multiplication of algebraic expression :
(i)     Write the product of the numerical coefficients.
(ii)     Write all the different letters occurring in the algebraic expressions giving to each letter an exponent (power) equal to the sum of all the exponents of that letter in the given expressions.
(iii)     The sign of the product is minus if there is an odd number of negative factors and plus if there is an even number of negative factors.

Multiplication of a Binomial by a Monomial :
In order to multiply a binomial by a monomial use the following rule :
a x (b + c)  = a x b + a x c.