Administration of a District

Administration of a District
For the purpose of administration, district is the most important unit in India. It is in the charge of a Collector or Deputy Commissioner who is the highest officer in a district. He belongs to the cadre of the Indian Administrative Service (I.A.S.) and is appointed by the State Government. He is, generally an experienced person who knows about all aspects of the district administration. In his work, he is assisted by numerous other officers who look after different aspects of  administration in the district. The officers include Tehsildars, Naib Tehsildars, Kanungos, Lekhpals or Patwaris, Superintendents of Police, Inspectors, District Judge and Additional Judges, Munsif, Chief Medical Officer, Inspector of Education and several other officers.
Functions of the District Collector or the Eputy Commissioner
As the head of the district administration, a District collector has to perform various functions 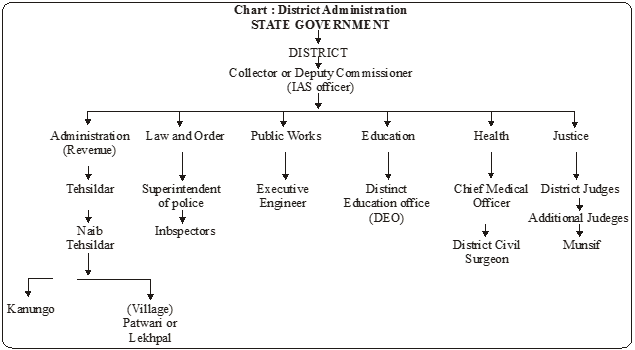 which can broadly be placed under the following heads :
1.    Maintenanc of law and order.
2.    Maintenance of land records and realisation of land revenue.
3.    Civic amenities and public services.
4.    General development of the district and coordination of work at different levels.
5.    Supervision of the Panchayati Raj.

Judicial Administration
The Judicial Administration at the district level deals with two types of law suits-civil and criminal. The civil courts decide civil cases pertaining to property and money matters while the criminal courts hear criminal cases regarding such crimes as thefts, murders and threat to life or property. The court of the Sessions judge is the highest court of justice in a district

•    The Deputy Conservator of Forests elected from the Indian Forest Service (IFS) manages the environment, forest and wildlife in the district.
•    District Civil Surgeon is the officer in charge of health services in a district. He supervises the working of hospitals and dispensaries of the district.
•    District inspector of schools or the District Education Officer inspects schools and supervises the work of the department of education.
•    Public Works Department is in charge of  construction and maintenance of roads and government buildings. The Executive Engineer is the head of this department.
•    District administration also provides relief to the affected people during emergencies like famines, floods, fire, epidemics and earthquakes.

Key Terms
1.    Patwari : the village accountant who maintains land records.
2.    SHO : the Station House Officer-the in charge at the police station.
3.    FIR : First Information Report-a written statement given as a complaint to the police.
4.    Tehsildar : the revenue officer of a tehsil.
5.    Jamabandi: the patwari's land records for all villages within a tehsil.